Concerns that some people are living on holiday caravan sites permanently in Wales, and not paying council tax to use services, have been raised. At a meeting of Powys County Council’s Planning, Taxi Licensing and Rights of Way committee, councillors have discussed changes proposed in a new draft Holiday Caravan Site Licence Conditions.

There are calls across Wales for all static caravan and chalet owners to start paying council tax, on the basis that local councils are losing out on money due to a ‘loophole’ that allows some owners to avoid the payment.

The Caravans and Houseboats (VAT Notice 701/20) notice states plainly the rules of council tax regarding caravan owners. It reads: “Where a caravan is used as a person’s sole or main residence, it will generally be subject to council tax, for which the resident or owner of the caravan or park home will be liable. Caravans on seasonal or holiday parks will not be subject to council tax (unless used as a person’s sole or main residence). Instead, the owner of the caravan site will be liable to pay non-domestic rates for the whole site. If, as a site owner, you pass on the cost of non-domestic rates to individual caravan owners, the recharge will form part of the pitch fee or rental and will be standard-rated.”

And this is at the heart of the debate. The increase in caravan parks means dozens more dwellings, none of which will be subject to tax due to them being in a seasonal or holiday park. Earlier this year, the Welsh Government increased the maximum level at which local authorities can set council tax on second homes to 300% from April 2023. If the caravan is your main property, you do pay council tax. If the caravan is in a seasonal park then only the owners of that park will have to pay council tax. 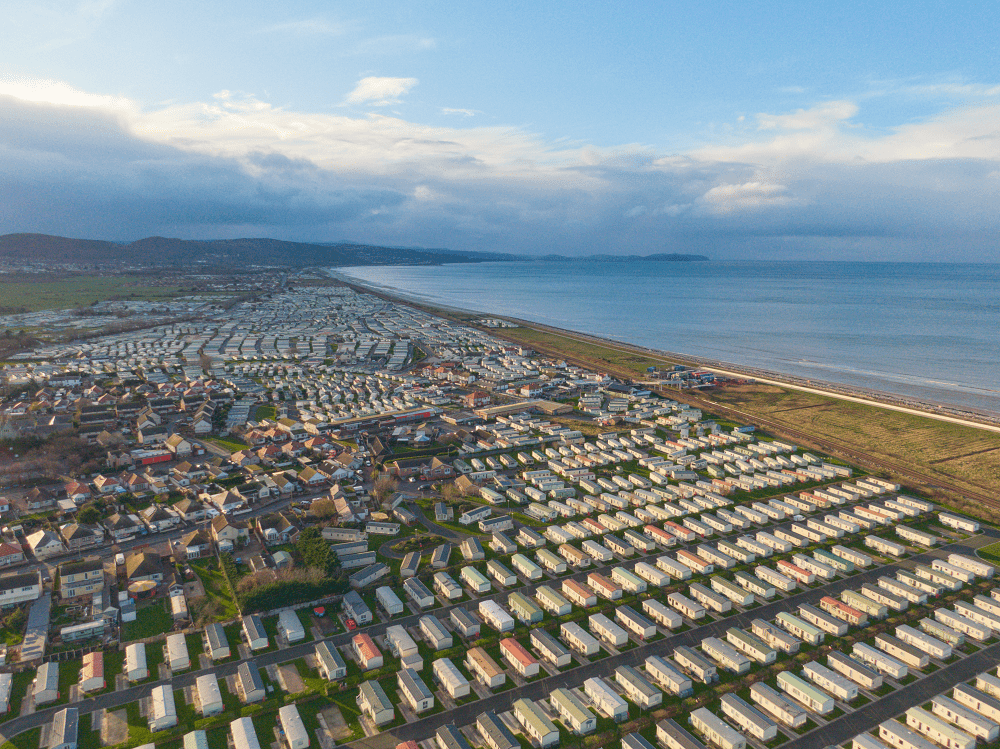 The owners of the parks can charge caravan users for the following:

Powys councillor and senior licensing officer Sue Jones believes this loophole is “a particular problem in north Wales” whilst discussing her own community’s grievances with caravans. And Gwynedd councillor John Brynmor Hughes said:

“In my view a house is a house and every house should pay tax based whatever band they’re in. I wouldn’t like to know how much we’ve lost in this area (due to transfers to non-domestic rates), but one thing I’d like to say is where we’re losing out most is the caravan parks. A caravan, even a tourer these days is like a bungalow, they have bedrooms in them and are huge, but they’re barely paying any tax. We have caravan parks open all year round, they’re not paying at all. Say a chalet on The Warren (in Abersoch ), I’ll name it, can cost between half a million and a million pounds yet pay £100 in tax, its a joke. We are losing taxes here yet they use our roads, dispose of their rubbish, they use the public toilets and everything a house would use. I think that we’re losing there. When you go abroad you have the tourist tax. I’m against the 100% (premium), I always have been, but I think we’re losing out especially during the pandemic when caravan parks are springing up everywhere. I would suggest we look at this again and pursue the caravans.”

The Welsh holiday caravan industry has an annual turnover of  £725m and sustains 4,000 jobs. The purposed Holiday Caravan Park (Wales)  Bill put forward by Clwyd West AM Darren Millar, the Conservatives’ Shadow Health Minister, will address the “hidden  population” of year-long static caravan users, which he said damaged  the Welsh economy by some of the  most intense use of public services,  while avoiding council tax which  would apply to a permanent residence.

The aim of the new bill is to reform the present law  on holiday caravan sites in Wales  which dates back to 1960. The proposals – which are under consultation until September 13 – would address the use of holiday caravans as main homes, the powers of local councils to address it and the resources to license caravan park sites. The British Holiday & Home Parks Association said it shared the concerns of Mr Millar that a “small  number” of holiday parks in Wales  are allowing – either knowingly or  unknowingly – holiday homes to be  unlawfully occupied as full-time  residences.

The body advises members of the  need to ensure that holiday caravans  are sold as second homes for leisure  purposes only. Housing and Regeneration minister, Carl Sargeant, said the Welsh  Government was happy to support  the bill but emphasised that owners  of caravan park must not be  “over-burdened” with regulation.

“We also recognise, as does Mr Millar, the importance of sustaining the major contribution made by  parks to the regional economy,” a  spokesperson said.

“The holiday caravan industry is a great Welsh success story which sees thousands of tourists flock to all parts of Wales every year,” Mr Millar said. “However, the industry is not without its problems and from discussions I have had with constituents and those who know the industry well, I am aware that a minority of site operators and residents do not stick to either the spirit or the letter of the law. The bill will seek to tackle these and other issues which I believe need to be addressed within the industry.”

Looking to Buy a Used or New Static Caravan?

Why not view our current stock of used and new static caravans on our website here – Buy a Caravan – or call us on 01424 774 759 to get more information or to book a viewing. Viewings at our Rye-based static caravan showground are highly recommended. So why not pop down and let us show you around the static caravans models you’re interested in, answering any questions you may have. We stock all the main static caravan brand manufacturers including Atlas Leisure, Willerby, ABI, Pemberton, Carnaby, Swift, and Delta.

Static Trader understands that finding the right static caravan to fit your needs as well as your plot can take up a considerable amount of time. Start a conversation with us early in your search and if you can’t find what you’re looking for from our range of off-site statics for sale, we’ll make every effort to source one for you.

If you need to upgrade what you already have, or you just wish to sell your static caravans you already own, then provide us with the information and we will get back to you with a price – Sell My Caravans

Sell Your Static Caravan to Us Today

Next Static Caravan Holidays Will Thrive Well into The Future